Neurofeedback is a Great Treatment for ADHD

Neurofeedback is a Great Treatment for ADHD

We come across countless stories of children and adults who have experienced tremendous results with mitigation of ADHD symptoms as well as dramatic alleviation of the problems altogether. One such story was featured in a NPR articles years ago, and is one of our favorites.

It is about a mother named Katherine Ellison, a Pulitzer Prize winning journalist, and her son who at the time was 12 years old and was experiencing a lot of frustration at school and with his peers. Furthermore Katherine had ADHD herself and when she heard about neurofeedback she found the idea very appealing.

Here is a brief excerpt from the NPR article:

Ellison says she tried meditation, but her mind kept wandering. Neurofeedback is better for people with ADHD, she says, because it provides constant feedback during a session, which is usually done in a therapist’s office.

People usually sit in a chair facing a laptop screen. The laptop is connected to electrodes applied to the scalp. Special software monitors the electrical activity in your brain. In particular, it measures rhythmic patterns known as theta and beta waves.

Proponents of neurofeedback say these patterns reveal when the brain is in a focused and attentive state. So the computer software looks for desirable brain wave patterns and changes the image on screen to let people know how they are doing. 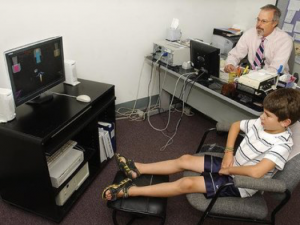 A clinical psychologist in Connecticut monitors the electrode impulses of a patient with ADHD. Some parents are turning to neurofeedback to treat the disorder.

The image that worked best for Ellison showed a field.

“When my brain responded the way that it was supposed to, the field would burst into color. I’d hear bird song and beautiful flowers would bloom,” she says. “But when I got distracted or when I got a little bit more sped up, the flowers would wilt. It would turn gray, and I’d know that I needed to work a little bit harder.”

At first, people can’t control their brain wave patterns, at least not consciously. But over time, their brains become conditioned to associate certain patterns with pleasant images or sounds — a reward for good behavior. And our brains like rewards.