Summary: A new study reports you may be able to improve long term memory consolidation by simply breathing through your nose.

Breathing through the nose may improve the transfer of experience to long-term memory, finds a study of human adults published in Journal of Neuroscience. The findings add to growing evidence for the influence of respiration on human perception and cognition.

Building on previous research in animals and humans, Artin Arshamian and colleagues compared the effects of nose breathing and mouse breathing during a one-hour consolidation period after participants were exposed to various odors.

Although this study did not measure brain activity, the researchers suggest that nose breathing may facilitate communication between sensory and memory networks as memories are replayed and strengthened during consolidation. 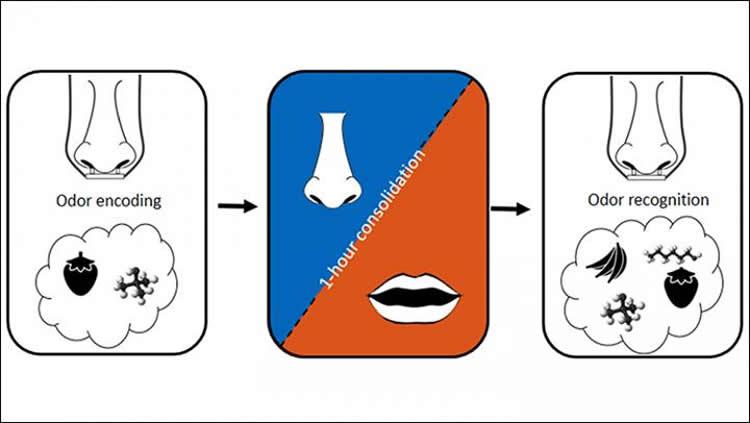 Schematic of experimental paradigm. The experiment consisted of two separate sessions, each including an encoding, a consolidation, and a recognition phase. In the encoding phase, participants were presented with six familiar (e.g., strawberry) and six unfamiliar (e.g., 1-butanol) odors one at a time and asked to remember them. The odors familiarity was pre-defined and a new set of odors were used in each session. After the encoding phase, participants rested passively without sleeping (consolidation phase) for one hour during which they either breathed through their nose (nasal consolidation) or mouth (mouth consolidation). Next, during the odor recognition phase, participants were once again presented with the odors from the encoding phase but this time intermixed with 12 new odors (6 familiar and 6 unfamiliar odors). For each odor, participants made a recognition judgment if the odor was new or old. Next participants rated odor intensity, pleasantness, familiarity, and nameability, as well tried to identify the odor. During both encoding and recognition, nasal airflow was monitored by a nasal cannula which enabled measurement of sniff parameters during odor presentation.

Memories pass through three main stages in their development: encoding, consolidation, and retrieval. Growing evidence from animal and human studies suggests that respiration plays an important role in the behavioral and neural mechanisms associated with encoding and recognition. Specifically nasal, but not mouth, respiration entrains neural oscillations that enhance the encoding and recognition processes. We demonstrate that respiration also affects the consolidation stage. Breathing through the nose compared to the mouth during consolidation enhances recognition memory. This demonstrates, first, that nasal respiration is important during the critical period were memories are reactivated and strengthened. Second, it suggests that the neural mechanisms responsible may emerge from nasal respiration.

Scientists note that children with autism have normal-sized brains at birth, but at some point—usually at the end of the first year of life—a part of the brain called the amygdala grows on average 13% larger than in non-autistic children