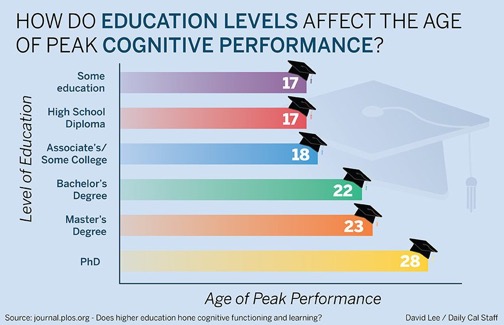 Earlier this year UC Berkley performed a study where they could ascertain through analyzing anonymous data given to them by Lumosity (an online cognitive training program). Going into the study the researchers knew that generally age 21 is the peak of cognitive performance for the general population, but were curious if varying levels of higher education would have any effect on extending this. The study was conducted by campus psychology professor Dr. Silvia Bunge, graduate psychology student Belén Guerra-Carrillo and General Assembly Space statistician Kiefer Katovich.

Here is the abstract:

Attending school is a multifaceted experience. Students are not only exposed to new knowledge but are also immersed in a structured environment in which they need to respond flexibly in accordance with changing task goals, keep relevant information in mind, and constantly tackle novel problems. To quantify the cumulative effect of this experience, we examined retrospectively and prospectively, the relationships between educational attainment and both cognitive performance and learning. We analyzed data from 196,388 subscribers to an online cognitive training program. These subscribers, ages 15–60, had completed eight behavioral assessments of executive functioning and reasoning at least once. Controlling for multiple demographic and engagement variables, we found that higher levels of education predicted better performance across the full age range, and modulated performance in some cognitive domains more than others (e.g., reasoning vs. processing speed). Differences were moderate for Bachelor’s degree vs. High School (d = 0.51), and large between Ph.D. vs. Some High School (d = 0.80). Further, the ages of peak cognitive performance for each educational category closely followed the typical range of ages at graduation. This result is consistent with a cumulative effect of recent educational experiences, as well as a decrement in performance as completion of schooling becomes more distant. To begin to characterize the directionality of the relationship between educational attainment and cognitive performance, we conducted a prospective longitudinal analysis. For a subset of 69,202 subscribers who had completed 100 days of cognitive training, we tested whether the degree of novel learning was associated with their level of education. Higher educational attainment predicted bigger gains, but the differences were small (d = 0.04–0.37). Altogether, these results point to the long-lasting trace of an effect of prior cognitive challenges but suggest that new learning opportunities can reduce performance gaps related to one’s educational history.

The Results
Testing response speed declined with age, regardless of education level. Conversely, those who received higher levels of education scored higher on more complex tests that focused on reasoning.

According to the study, the test population was split into educational categories, with minimal differences in performance between those with a bachelor’s degree and a high school diploma compared to differences between those with a doctorate and a high school diploma. For each educational category, the data also indicated that peak cognitive performance occurs around the age of graduation.

Additionally, the findings showed that people with higher educational attainment have only a slight gain in learning, suggesting that those without the same opportunities can make up for gaps in education. According to Guerra-Carrillo, this “speaks to the importance of gaining access to education.”

Gamma waves are the brain waves with the highest frequency (40-100 Hz) and are important for learning, memory, and information processing. Too much gamma can result in anxiety, while too little can result in ADHD or depression