Mental Disorders and Our Children

Mental Disorders and Our Children

Mental disorders are common among children in the United States, and can be particularly difficult for the children themselves and their caregivers. While mental disorders are widespread, the main burden of illness is concentrated among those suffering from a seriously debilitating mental illness. Just over 20 percent (or 1 in 5) children, either currently or at some point during their life, have had a seriously debilitating mental disorder. 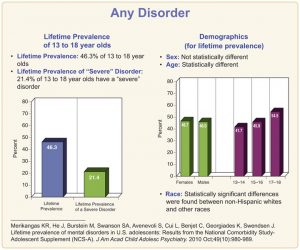 The Centers for Disease Control and Prevention’s National Health and Nutrition Examination Survey (NHANES) includes prevalence data for children ages 8 to 15; a slightly younger age range than the data from the NCS-A chart above. These data show that approximately 13 percent of children ages 8 to 15 had a diagnosable mental disorder within the previous year. The most common disorder among this age group is attention-deficit/hyperactivity disorder (ADHD), which affects 8.5 percent of this population. This is followed by mood disorders broadly at 3.7 percent, and major depressive disorder specifically at 2.7 percent.
Source: https://www.nimh.nih.gov/health/statistics/prevalence/any-disorder-among-children.shtml
Do not let these statistics alarm you, there is always help available.

At Neurohealth Associates, our President and Founder, Dr. Kyle Bonesteel, PH.D, ABPP-CN, BCN, is one of only approximately 40 board certified neuropsychologists in the entire state of Illinois recognized by the American Academy of Clinical Neuropsychology (AACN). He is one of only a few neuropsychologists in the entire US who is board certified by both the AACN and the BCIA in the fields of neuropsychology and EEG neurofeedback. He was trained as a post-doctoral fellow at Northwestern University Medical School in the departments of behavioral neurology and neuropsychology, and has served as a professor of Neurology at Loyola University Medical Center.
In Illinois contact us for a consultation at https://nhahealth.com/contact/

If babies’ bodies grew at the same rate as their brains, they would weigh 170 pounds by 1 month old