Creativity is one of humanity’s most distinctive abilities and enduring mysteries. Innovative ideas and solutions have enabled our species to survive existential threats and thrive. Yet, creativity cannot be necessary for survival because many species that do not possess it have managed to flourish far longer than humans. So what drove the evolutionary development of creativity? A new neuroimaging study led by Yongtaek Oh, a Drexel University doctoral candidate, and John Kounios, PhD, a professor in Drexel’s College of Arts and Sciences and director of its Creativity Research Lab, points to an answer.

The study, recently published in NeuroImage, discovered that, in some people, creative insights, colloquially known as “aha moments,” trigger a burst of activity in the brain’s reward system — the same system which responds to delicious foods, addictive substances, orgasms and other basic pleasures.

Because reward-system activity motivates the behaviors that produce it, individuals who experience insight-related neural rewards are likely to engage in further creativity-related activities, potentially to the exclusion of other activities — a notion that many puzzle aficionados, mystery-novel devotees, starving artists and underpaid researchers may find familiar, according to Kounios.

“The fact that evolution has linked the generation of new ideas and perspectives to the human brain’s reward system may explain the proliferation of creativity and the advancement of science and culture,” said Kounios.

The study focused on the phenomenon of aha moments, or insights, as prototypical instances of creativity. Insights are sudden experiences of nonobvious perspectives, ideas or solutions that can lead to inventions and other breakthroughs. Many people report that insights are accompanied by a mind-expanding rush of pleasure.

The team recorded people’s high-density electroencephalograms (EEGs) while they solved anagram puzzles, which required them to unscramble a set of letters to find a hidden word. Such puzzles serve as small-scale models of more complex forms of problem-solving and idea generation. They noted which solutions were achieved as insights that suddenly popped into awareness, in contrast to solutions that were generated by methodically rearranging the letters to look for the right order.

Importantly, the test subjects also filled out a questionnaire that measured their “reward sensitivity,” a basic personality trait that reflects the degree to which an individual is generally motivated to gain rewards rather than avoid losing them. 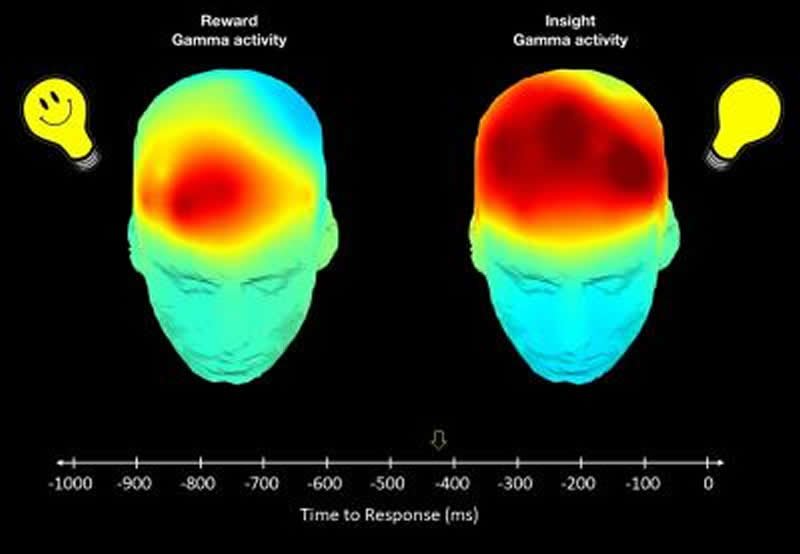 The horizontal axis shows time, in milliseconds, counting down to the button-press that test-subjects made (at 0 milliseconds) immediately upon solving an anagram puzzle. Maps of high-frequency “gamma” EEG activity are projected on to two head models. The map on the right shows activity associated with insight solutions minus activity associated with non-insight solutions. The appearance of the lightbulb marks the onset time of the insight-related activity recorded over left prefrontal cortex. The map on the left shows the reward-related activity recorded over right prefrontal cortex in individuals who are high in reward sensitivity. This reward signal is marked by the appearance of a lightbulb with a smiley face at about 460 milliseconds before the button-press. The image is credited to Drexel University.

The test subjects showed a burst of high-frequency “gamma-band” brainwaves associated with aha-moment solutions. However, only highly reward-sensitive people showed an additional burst of high-frequency gamma waves about a tenth of a second later. This second burst originated in orbitofrontal cortex, a part of brain’s reward system.

The study shows that some people experience creative insights as intrinsically rewarding. Because this reward-related burst of neural activity occurred so quickly after the initial insight, only a tenth of a second, it did not result from a conscious appraisal of the solution. Rather, this fast reward response was triggered by, or integrated with, the insight itself.

This study suggests that measurements of general reward sensitivity may help to predict who will practice, develop and expand their creative abilities over time.

Funding: The study, “An Insight-Related Neural Reward Signal” was funded by a grant from the National Science Foundation and was published in the journal NeuroImage. Co-authors include Christine Chesebrough, doctoral student; Brian Erickson, post-doctoral researcher; and Fengqing (Zoe) Zhang, PhD, of Drexel University.

About this neuroscience research article