Summary: An EEG study reveals people with schizophrenia and their siblings without the disorder share patterns of brain activity that are different from people with no familial history of schizophrenia. As one sibling didn’t suffer from schizophrenia, researchers say the different brain signature could serve as a biomarker for the mental health disorder.

People with schizophrenia and their healthy siblings share patterns of brain activity that are different from those seen in individuals with no family history of the disorder, scientists from EPFL have found. Because the siblings do not show schizophrenia symptoms, this brain ‘signature’ could serve as a marker for the early diagnosis of the disorder. The findings, published in Nature Communications, could open up avenues for developing new treatments for schizophrenia.

Schizophrenia appears in adolescence or adulthood and often comes with false beliefs, paranoid thoughts, and a tendency to see or hear things that aren’t there. The strongest risk factor for the disorder is the presence of an affected close relative: one in ten siblings of people with schizophrenia are predicted to develop the disorder, compared with 1 in 100 individuals among the general population.

However, scientists have known that there is no one single genetic variant that causes schizophrenia. The disorder rather stems from many different DNA mutations, duplications, and deletions that cause the developing brain to go awry. For this reason, predicting who’s at risk of developing schizophrenia is no simple task.

Because genetic studies yield slow clues into dozens of genes associated with schizophrenia, the disorder should be dissected into measurable traits found in both individuals with schizophrenia and unaffected members of their families, says study co-senior author Michael Herzog, head of the Psychophysics Laboratory at EPFL School of Life Sciences. These quantifiable traits, called endophenotypes, connect the symptoms of a disorder to the underlying genetic risk factors.

Led by Janir Ramos da Cruz, a postdoc in the Herzog’s lab and the lab of Patrícia Figueiredo at the University of Lisbon, the team scanned the participants’ brains using resting-state electroencephalography (EEG). This non-invasive technique measures the brain’s electrical activity via electrodes attached to the scalp of individuals as they relax and sit still for about five minutes.

After gathering the EEG data, the researchers tracked specific patterns of neuronal activity that have been described as the building blocks of cognition and emotion. Dubbed “EEG microstates,” these patterns last between 60 and 120 milliseconds and arise when specific brain areas activate together.

Previous work has revealed that individuals with schizophrenia have abnormal EEG microstates, but the new study is the first to show that unaffected siblings share the same abnormalities in these brain patterns.

The researchers found that a specific type of microstate, called class C, occurred more frequently and for longer durations in individuals with schizophrenia and their siblings than it did in healthy people. Other brain activity patterns, known as microstate class D, occurred less frequently and for shorter amounts of time in those with schizophrenia and their siblings than in healthy individuals.

What’s more, people who had just experienced their first episode of psychosis showed the same anomalous patterns of brain activity as those who had been suffering from schizophrenia for years. “This suggests that these microstate abnormalities occur right at the beginning of the disease,” Ramos da Cruz says. 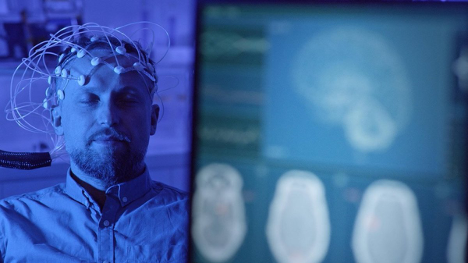 Previous work has revealed that individuals with schizophrenia have abnormal EEG microstates, but the new study is the first to show that unaffected siblings share the same abnormalities in these brain patterns. Image is credited to EPFL.

The team also found that a third type of microstate, called class B, occurred more frequently and for longer periods in siblings than in individuals with schizophrenia. This might explain why healthy siblings do not show schizophrenia-related behaviors, despite sharing the same brain ‘signature’ as people with the disorder. “This could be a protection mechanism that prevents the imbalance in microstates class C and D from creating functional problems,” Ramos da Cruz says.

How the alterations in EEG microstates affect brain function is still unclear, Herzog cautions. “But for diagnostic purposes, you don’t need to know that,” he adds. Herzog says that looking for abnormal patterns in brain waves could be one component of a screening battery for schizophrenia, and it could help to detect who is susceptible to the disorder before clinical symptoms develop.

About this schizophrenia research article

If you didn’t have a brain, you would not be able to read this